Two candidates jockeying for Colorado’s 2018 gubernatorial election threw their support behind cryptocurrencies during a debate over the weekend.

Appearing during the Nexus Conference in Aspen, Democrat Erik Underwood and Republican Lew Gaiter spoke about privacy, voting and issues facing the Colorado cannabis industry – and how cryptocurrencies and blockchain can fit into the equation. Former Minnesota Governor Jesse Venture, ShapeShift CEO Erik Voorhees and Christina Tobin, the founder of The Free and Equal Elections Foundation, moderated the debate.

Underwood and Gaiter are among a broad slate of candidates vying for the Colorado governorship, with the actual vote set for next November. Per the Denver Post, as many as ten candidates are planning to enter the race or are preparing to do so.

Gaiter, commissioner for Colorado’s Larimer County, voiced support for blockchain in the public sector, calling for the state to take a more leading role among other regions in the US.

“We need to become more technology friendly and I think that blockchain, cryptocurrency is a great place where we can be leading-edge,” he said.

Underwood, a former Republican candidate for the US Senate now seeking the Democratic nomination, also advocated for the government to play a role.

He even said that he is developing a plan for a Colorado-based cryptocurrency that would be used to help alleviate banking and payment issues in the state’s cannabis industry. Colorado voters approved the legalization of both the use and sale of marijuana in 2012.

“I have a plan to create a cryptocurrency for Colorado. And what this cryptocurrency will do is that it will link up with the cannabis industry, so we know exactly how much we’re taking in for taxes.”

Both Gaiter and Underwood said that they would defend any use of cryptocurrency or blockchain by Colorado in the event of pressure from the US government, with Underwood saying that he would take the issue to court if need be.

“We do what’s best for Coloradans. And to answer Governor Ventura’s question, we’ll go to court if necessary,” said Underwood.

A recording of the debate can be found below.

Disclosure: CoinDesk is a subsidiary of Digital Currency Group, which has an ownership stake in ShapeShift. 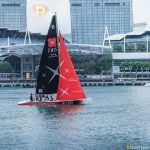