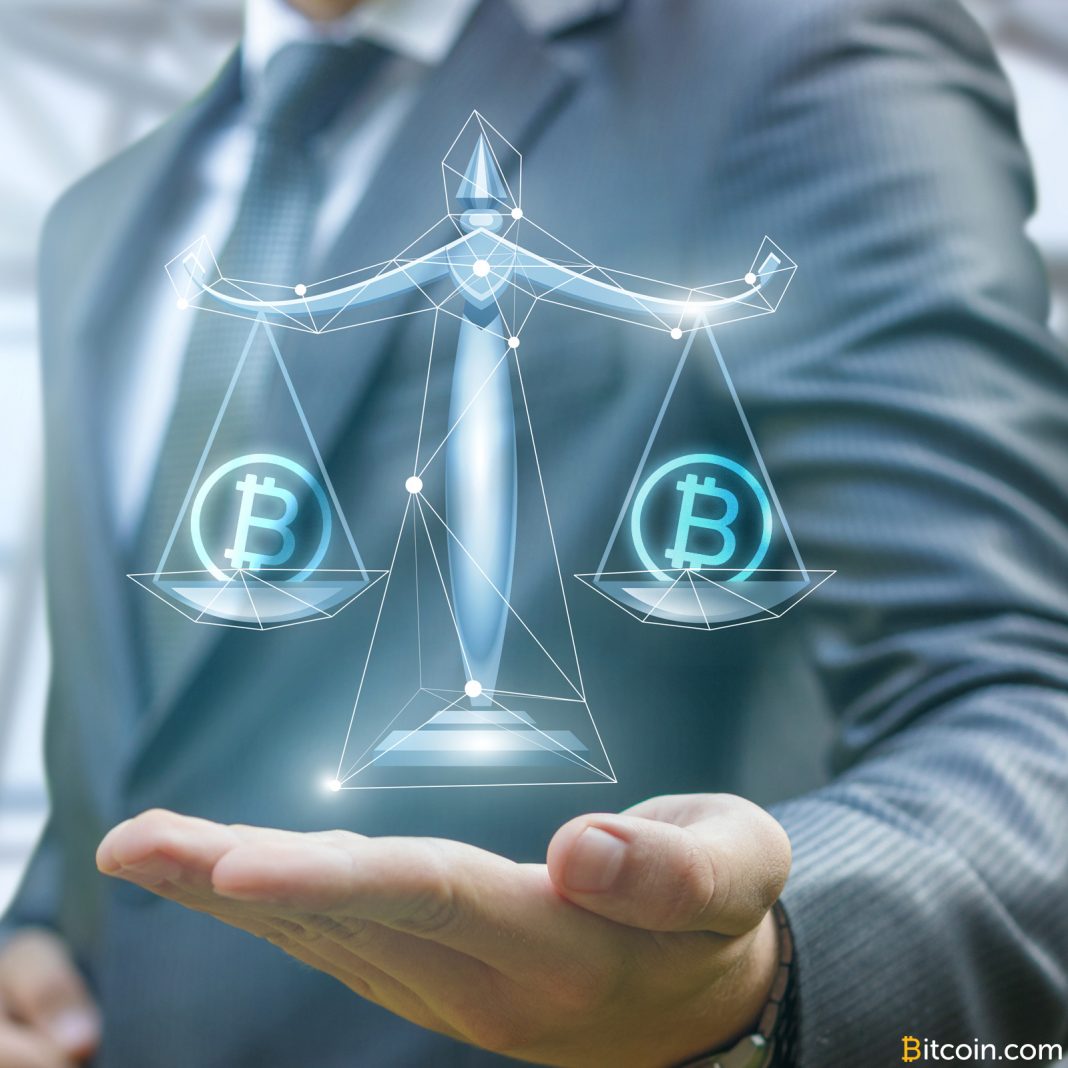 The Satoshi Revolution: A Revolution of Rising Expectations
Section 5: Saving the World Through Anarchism
Chapter 11, Part 6
How the Blockchain Provides Private Justice

The key to…an anarcho-capitalist court system is found in the concept of a “personal judiciary”. [Acting as your own judge.]…The courts’ purpose is to enable men to settle disputes so as to avoid violent resolution as well as aggression-overcompensation cycles. Regarding the courts’ decisions as legitimate is the only way for the litigants to avoid personal judiciary actions.

– Karl T. Fielding, “The Role of Personal Justice in Anarcho-Capitalism”

Justice is a stumbling block for all political systems. It is a particular problem for anarchism because its conception of justice sounds bizarre to many; anarchism uniquely argues that justice should be a commodity or service provided through the free market, rather like insurance. The view of justice also sounds contradictory to some; how can a society based entirely on voluntary exchange deal with crimes such as theft that might require seizing stolen goods and holding criminals against their will?

The latter objection was ably dismissed by Murray Rothbard during a remarkable debate on anarchist justice with Professor of Philosophy John Hospers. Rothbard wrote, “I see no reason whatever why anyone should worry about the consent of criminals to their just punishment. I believe that nothing should be done to anyone without his consent, except for the just punishment of criminals who have already violated the “consent,” the person or property, of their victims.”

The main point becomes whether or not the free market can deliver justice. And the first question to arise on this topic is usually, “What would free-market justice look like?” The unsatisfying answer is that no one knows for sure, any more than people from decades ago knew that communication would look like the Internet or transactions like the blockchain. (More on this later.)

Meanwhile, the principles upon which private justice is based can and must be defined with clarity.

The classical-liberal philosopher John Locke used a “There Is No Alternative” argument in his book Second Treatise of Government. It is a type of either/or reasoning in which disproving the “either” (anarchism) means validating the “or” (the state).

In this article’s opening quote, Karl Fielding used the term “personal judiciary.” The term is based on a political argument presented by Locke, and it refers to the idea that a man has a natural right to be the judge of his own case. Every man has the right to forcefully reclaim his property from a thief, for example, because this is an extension of his right to defend person and property.

Locke acknowledged this right, but he was against practicing it. He wrote, “That in the state of nature every one has the executive power of the law of nature, I doubt not, but it will be objected, that it is unreasonable for men to be judges in their own cases, that self-love will make men partial to themselves and their friends: and on the other side, that ill-nature, passion and revenge will carry them too far in punishing others; and hence nothing but confusion and disorder will follow.”

“The state of nature” refers to human existence without “society,” in the modern sense of that word. In a state of nature, Locke believed all men were equal with the same natural right to judge their own cases. Again, if a possession had been stolen, then the owner could judge the act to be unfair and personally remedy the injury; he could retrieve his property, including whatever compensation he deemed was due. In short, private justice is a matter of right.

Locke believed a private judiciary process would tend sharply toward unfairness, however, because even an honest man sees things from his own perspective and self-interest. Even a well-meaning man could be mistaken about the facts, including the aggressor’s identity. This means a world occupied by people who judged their own cases would lead to discord, especially if the aggressor himself felt aggrieved. An aggressor might think the violence used in retrieving the possession was excessive, for example, or that the compensation added was unreasonable. At that point, the aggressor would judge his own case and find himself to be the victim; he might well seek redress or revenge. Or a falsely-accused non-aggressor might decide to rectify the wrong done to him. The process could easily become an endless loop of violence because the justice was not accepted as legitimate by both parties.

Locke believed that breaking the cycle of “confusion and disorder” required an unbiased judge whose assessment would be seen as legitimate by both sides. Put in crypto terms: decentralized justice needed to be centralized under the authority of a trusted third party. The stakes were non-trivial. Without a trusted third party to judge cases and render legitimate decisions, civil society was not possible.

The need for legitimacy in justice was a major reason—if not the major reason– Locke advocated a limited state. For centuries, this has been a mainstay argument against anarchism and freedom. And the either/or argument is correct, in this case. It is either freedom or it is the state, with justice being a pivot point between the two. (A form of this argument is playing out within the crypto community; it is either anarchism or the state, with recourse against theft and fraud being the pivot point.) Otherwise stated: If individuals cannot render justice, then the state becomes necessary, even for those who view the state as a necessary evil and try to constrain it through checks and balances.

What does this have to do with the blockchain? With the blockchain, the centralization of justice is reversed immediately; control is taken from the state and returned to the individual, without blood or votes or revolution. But if Locke is correct about justice requiring a trusted third party, then the state’s monopoly over justice is likely to establish itself again. What can transparent ledgers do to prevent this?

A definition of justice is a place to start answering. Justice is far too closely associated with police officers, lawyers, courts, and prisons. Such state employees are not justice; they are the ones who come into play when justice breaks down; they are there to protect the state, not individuals or the peace. The state so dominates this area, however, that administrative justice is the first definition that comes to people’s minds.

Ethical justice applies to the conduct of civil and private life. The Aristotelian definition appeals to common sense: everyone should receive what they deserve from each other. Few things are as just as the free market in which two people make a direct exchange for agreed-upon values, and then walk away. A woman who goes shopping, buys a tomato, and goes home is enjoying justice. It may seem as though she is merely enjoying daily life, because that statement is also true. In normal life, the free market generally provides people with what they deserve, even if it is not what they want.

The tricky bit is what to do when the justice of normal life breaks down—a situation that is otherwise known as violence. Eliminating the most pervasive form of violence—the state—would also eliminate most injustice. But a stateless society would experience private violence against person or property.

Two approaches to minimizing private violence and its damage are prevention and punishment. Prevention is the best approach, by far, for a free society. It preserves person and property; it avoids the unpleasant process of correcting an injustice; it greatly reduces the need for procedures or institutions to correct injustice; it does not create an entry point for the state.

The blockchain does not merely promote freedom, it also prevents theft by both the state and by private individuals. A peer-to-peer transfer avoids the trusted third party participation where so much theft occurs; privately-held wallets eschew the need to trust banks, exchanges, or other third parties. The blockchain’s transparency makes it possible to view where every piece of crypto goes. The irreversibly and time-stamping of the transfer were included specifically to prevent theft. The anonymity that is possible with a bit of effort provides protection as well.

The protection of crypto and the blockchain breaks down most dramatically when trusted third parties are once again introduced into the equation. Many of the problems that the blockchain cured return with trusted third party involvement. The greatest theft has occurred in exchanges, for example. With unethical exchanges or centralized ones that function like banks, the user’s trust has been misplaced, and the exchanges become thieves. The ethical but incompetent ones serve as an invitation to hackers, and the user’s trust has again been misplaced. Ones that are both ethical and competent are still risks because they are public; they are like well-locked houses that get burglarized, nevertheless.

Guidelines are available for using exchange in as a safe a manner as possible. Choose a decentralized one, for example, and never surrender private keys. But the crypto community has not adequately addressed the problems created by re-introducing trusted third parties. To my knowledge, no exchange even offers users an insurance policy or charges higher fees as a warranty against theft.

So far, only the impact of the blockchain on economic justice has been discussed, but the possibilities for all forms of justice are immense. Distributed systems can transmit peer-to-peer smart contracts that are self-enforcing. A recent U.S. Senate report stated of smart contracts, “the concept is rooted in basic contract law. Usually, the judicial system adjudicates contractual disputes and enforces terms, but it is also common to have another arbitration method, especially for international transactions. With smart contracts, a program enforces the contract built into the code.” (How smart the current contracts actually are is a debated point, but they are a proof of principle.)

The 19th century individualist-anarchist Benjamin Tucker referred to anarchism as “society by contract.” The contracts could express any exchange, from leases to prostitution, from insurance policies to drug deals. The contracts would not be legal or illegal, only consensual. Just as crypto bypasses central banking and decentralizes economic control down to the individual, smart contracts have the potential of bypassing much of the legal system and returning to the people’s law—contract law. But, like crypto, the contracts would not require a trusted third party.

[To be continued next week.]

Reprints of this article should credit bitcoin.com and include a link back to the original links to all previous chapters